I was thrilled when curator-about-town Lisa Gray (my former Mills student and TA) asked me to host a themed reading for 14 Black Poppies/The Bloom Series. I chose the rich topic, BAD TRIPS, and decided to continue the personal touch by inviting Elaine Lee (one of the first people to publish me) and four folks I’ve taught or mentored through VONA Summer Workshops for Writers of Color, the San Francisco Writers Grotto and LitQuake.

The result is BAD TRIPS:  What do a global health epidemiologist, Bedouin-Finnish musician, immigrant rights activist, and host of a Black travel show have in common? From Navigating Tanzania’s Gay Underground to Crossing the Border on an Acid-trip. From Bottoming out at Burning Man to Flying off to Fight Ebola: It’s good stories come from BAD TRIPS! 3 writers + 1 poet + 1 storyteller + 1 singer/songwriter. Music by Hassan el-Tayyab of American Nomad.

/// ELAINE LEE is a globetrotter and travel journalist. The editor of Go Girl: The Black Woman’s Book of Travel and Adventure, she has visited 56 countries and made two solo trips around the world. Her ground zero home is in Berkeley, and her cyberhome is www.ugogurl.com. Most recently she taped an episode of Bay Area Check, Please!

/// KARINA MUÑIZ is a Prose Fellow/MFA Candidate in the Community Engagement Program at Mills College, and the Political Director at Mujeres Unidas y Activas, a grassroots organization of Latina immigrants. An alumna of Voices of our Nations Arts Foundation/VONA, she holds Masters degrees in Urban Planning and Latin American Studies from UCLA.

/// TOM PYUN is a travel addict who works as a nonprofit consultant to support his habit. A queer Korean-American man, he lived and worked in Tanzania for two years where homosexuality was criminalized with 30 years imprisonment. He is a 2015 Voices of our Nations Arts Foundation/VONA Fellow and has been published in Reed Magazine.

/// SRIRAM SHAMASUNDER started writing creatively as an undergraduate in June Jordan’s Poetry for the People class at UC Berkeley. He is a doctor/poet who works at UCSF and runs the HEAL Initiative (@healinitiative), a program focused on building health workforce capacity internationally and in the Navajo Nation. He writes to keep his balance and bear witness.

/// HASSAN EL-TAYYAB is an award-winning singer/songwriter, author, educator, and cultural activist residing in San Francisco. His critically-acclaimed Americana act, American Nomad, performs regularly at festivals and venues up and down the West Coast and beyond. His memoir is forthcoming this fall from Poetic Matrix.

/// FAITH ADIELE, HOST is author of a travel memoir; subject of the PBS documentary My Journey Home; and co-editor of Coming of Age Around the World. She teaches at California College of the Arts, The San Francisco Writers’ Grotto, and Voices/VONA, where she’s established the nation’s first workshop for travel writers of color.

My VONA and Mixed Remixed Festival pal Mat Johnson, whose latest novel is out next week, has an essay in The New York Times Magazine, “Proving My Blackness,” on testing his racial DNA. 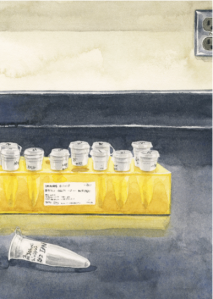 This is a rather sweet Grotto – VONA – CCA tale. This evening my friend, Burmese poet Maw Shein Win, is guest curating the Bay Area Generations reading, which pairs 2 “intergenerational” writers together. When I joined the famed San Francisco Writers Grotto, I was excited to see a Burmese name on the membership list and resolved to hunt her down. Imagine my surprise to discover that her mother was the first Burmese bhikkhuni, and her surprise to discover that I had been Thailand’s first black Buddhist nun!

Meanwhile, I had also met my friend Audrey Esquivel in a workshop for mixed-race Buddhists of color at the East Bay Meditation Center and discovered that we share a rather unique combination of cultural influences. Get this – she’s African American and Anglo Burmese, and her blog is called Chutney & Chitlins. I learned that she too was writing a memoir about her international family set within the tumultuous context of global history, and as soon as I heard her parents’ amazing story, I resolved to do everything I could to make sure it was told.

Audrey took her first ever writing creative class with me – my Your Personal Odyssey: Explore & Tell Your Story with Faith Adiele at The Grotto. I later arranged for her to meet my friend, award-winning writer Canyon Sam who’s writing about Burma, and Maw, who in turn introduced her to the Bay Area Burmese writing community. Last summer, I encouraged Audrey to apply to the VONA/Voices: Summer Workshop for Writers of Color, where I’ve taught for the past 7 years, and she was able to study with a Stacyann Chinn, a Black Asian immigrant woman memoirist.

Since then Audrey and I have become part of a writing group comprised of mixed-race Buddhist women of color (only in the Bay Area, my friends say!), and she was just accepted to study with me in the MFA Program in Writing at California College of the Arts! So how fitting that tonight Audrey and I will be reading together at Bay Area Generations, curated by Maw! Get this – the suggested donation gets you a chapbook of the evening’s readings, including 2 stories about our black dads!

Working on a mixed or 1st-generation memoir? Monday is the deadline to apply to work with Faith Adiele and Stacyann Chin this summer at VONA!

I was recently asked to blurb The Chalk Circle: Intercultural Prizewinning Essays, a new anthology that’s already racking up awards and sales records. One of my previous VONA students is in it, and the Introduction is by VONA faculty member David Mura. A great teaching tool!

The launch party is this Friday (May 4) in San Francisco at Books Inc. in Opera Plaza, 601 Van Ness Avenue, at 7 PM.  The book’s release arrives just in time for the annual World Day for Cultural Diversity Dialogue and Development on May 21st, as proclaimed by the United Nations’ Universal Declaration of Human Rights. Editor Tara L. Masih will open the program, and authors will sign books after the reading. Refreshments will be served. 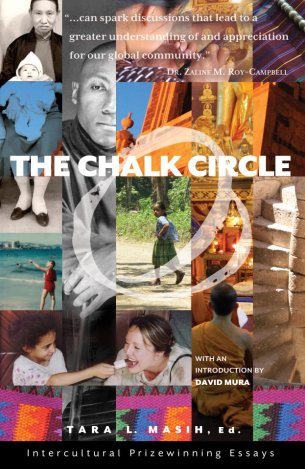 Tara L. Masih has assembled a stunning collection. Disregard the textbook-sounding title and gaze upon the mosaic-like cover. The range of cultural diversity and personal complexity packed into this slim, beautiful volume is staggering and far outstrips any other collection out there. These now-American writers and travelers experience the intercultural encounter at home, overseas, within their own communities, families, and selves. The voices range from adult journalists and Peace Corps volunteers to the children of Nazis and refugees. For some, like Third Culture Kids and the children of survivors, their histories and true identities are hidden, and it is through engaging with food and spirituality, photographs and music, family stories and private letters, global and personal history, that they are able to recover and share the nuances of life on our globalizing planet. Each story is a polished, multi-faceted gem of unprecedented color and clarity, which together form a glittering necklace that redefines what it is to be intercultural—that is, human—in the world today. This is a book I will be teaching and recommending to friends and strangers again and again.

–Faith Adiele, Coming of Age Around the World: A Multicultural Anthology; Meeting Faith: The Thai Forest Journals of a Black Buddhist Nun

THIS COULD BE YOU, if you apply to VONA: Summer Workshops for Writers of Color by TOMORROW (April 9)!

I just found this photo on my phone. It’s classic me (lime green) and classic Junot Díaz. He spoke at Carnegie Mellon U in Pittsburgh, and afterwards I took him to my favorite retro hangout, Kelly’s. I think the next day we heard about the Pulitzer.

Each summer developing and experienced writers in all genres come from around the country and globe to work and build community with renowned writers of color. In choosing our faculty we select only internationally celebrated authors who are known for their excellence as writers and their sensibilities toward political and cultural issues. All of our workshop leaders are inspiring and proven teachers experienced with diverse populations.

I’m helping to change the face of travel!

I’m Storytelling on stage for the 3rd time!

Faith Adiele has written an astonishing book - part travelogue, part coming-of-age memoir - that defies easy classification because it is finally a memoir of the soul.
--Richard Rodriguez, author of Brown: The Last Discovery of America

Jan Willis meets Anne Lamott in this funny, observant memoir…readers can and will learn from Adiele, who parses out her second stay in Thailand with a comic’s timing, a novelist’s keen observations about human idiosyncrasies and an anthropologist’s sensitivity to issues of race and culture.
--Publishers Weekly Starred Review

Coming of Age Around the World

This timely anthology is a step towards wholeness in a broken world.
--O: The Oprah Magazine

Though I'm African, and though I'm American, I'm not African American.
--My Journey Home